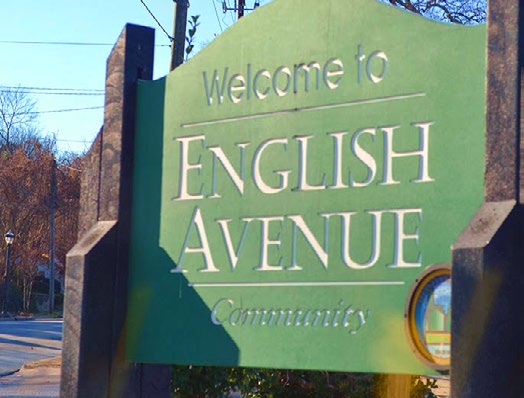 Pre-existing relationships – Quest Communities credits their ability to successfully assemble the financing for Quest Village at English Avenue to their history of partnership with different funding partners.

Neighborhood familiarity – Prior experience working in the Westside neighborhood helped Quest Communities prepare an effective rehabilitation plan (including their schedule and budget) and build trust with neighborhood residents, even in the face of skepticism.

The Westside has experienced real estate speculation and investment in recent years, driven in part by the 2017 opening of the Mercedes-Benz Stadium in the neighborhood. Part of this investment has been facilitated by local organizations like Invest Atlanta, the City’s Economic Development Authority. Invest Atlanta purchased several abandoned and blighted single-family homes and smaller apartment buildings across the Westside and then issued a request-for-proposals for mission-driven developers to rehabilitate these properties, return them to productive use, and create affordable housing for current and future residents. Additionally, Invest Atlanta offered a 65-year land lease in exchange for affordable units, as part of the selection process. The land lease effectively eliminated the acquisition cost.

Quest Communities proved to be an ideal candidate for this work: the developer was based in the Westside, had a mission focused on social equity, and had previously worked with Invest Atlanta. Quest Communities was already familiar with the neighborhood, having completed several projects nearby.

Vacancy was one attractive aspect of the properties to Quest Communities. Vacant properties meant rehabilitation would not displace any residents.

Rehabilitation of Quest Village at English Avenue was feasible due in large part to Quest Communities’ extensive and long-term relationship with the City of Atlanta, Invest Atlanta, Atlanta Housing Authority (AHA) and Partners for H.O.M.E., all of which helped finance the project. Building these relationships, coordinating efforts, and working collaboratively took time—and this process predated this project.

Even with strong, established relationships, intentional community engagement and education was necessary to overcome skepticism about the project. Residents were concerned about the type of housing (permanent supportive housing for persons experiencing homelessness) and that the units would be available to anyone in the city (rather than available to residents in the immediate neighborhood). These concerns were directly addressed through regularly and consistently communicating the property’s key benefits to the entire neighborhood. These benefits included returning abandoned property to active use, supporting neighborhood repopulation (which had experienced sustained population decline), and fostering a mixed-income community. Through their communication, Quest Communities built support for the project, enabling it to move forward.

Quest Communities needed multiple financing sources to achieve their affordability goals and be competitive for the land lease offered by Invest Atlanta in exchange for affordable units. As a result, they chose to assemble several subsidies, deciding that the impact on their development budget would outweigh the compliance costs.

The City of Atlanta committed its funds, providing a 30-year permanent loan for $800,000 at one percent interest. Partners for H.O.M.E., the local CoC, awarded the project a $222,000 grant, followed by Invest Atlanta’s 20-year permanent loan for $245,000 at two percent interest. The project also received a 65-year land lease from Invest Atlanta, in exchange for providing units that were affordable to households at or below 60 percent of area median income (AMI). With these commitments, AHA provided rental subsidies to help achieve the deepest level of affordability possible for these units.

The Quest Village at English Avenue properties were vacant and abandoned, requiring a total gut rehabilitation and site improvements prior to moving in tenants. The rehabilitation process took roughly seven months.

The total cost of the project was approximately $1.4 million. Hard costs made up 68 percent of the total development cost, or about $78,000 per unit (on par with rehabilitation costs for other projects Quest Communities completed in the area) (see Table 2).

The building needed to be upgraded, redesigned and retrofitted with accessibility features to meet the needs of its intended residents. As a result, the architectural design was the most expensive element of the rehabilitation process; it cost $37,500. Due to the age and condition of the building, environmental abatement was the second most expensive part of the process; it cost $30,410. After accounting for all costs, the Quest Village at English Avenue has a projected net operating income (NOI) of $305,000 over the next 15 years.

Given the risks and potential unknowns associated with abandoned properties, Quest Communities set aside nearly $50,000 in reserve funds in case of unexpected needs that emerged during rehabilitation. These reserves proved necessary when interior demolition revealed a need to replace some of the building frame and to level the floors. The plumbing also needed to be completely replaced internally and externally to the public systems, which Quest Communities noted as a common theme among unsubsidized affordable small- and medium- scale multifamily (SMMF) properties they have preserved in Atlanta.

Through the preservation of the Quest Village at English Avenue, Quest Communities successfully reintroduced a SMMF property to productive use and provided deep levels of affordability and services for formerly homeless persons—and did so in one of Atlanta’s accelerating real estate markets.