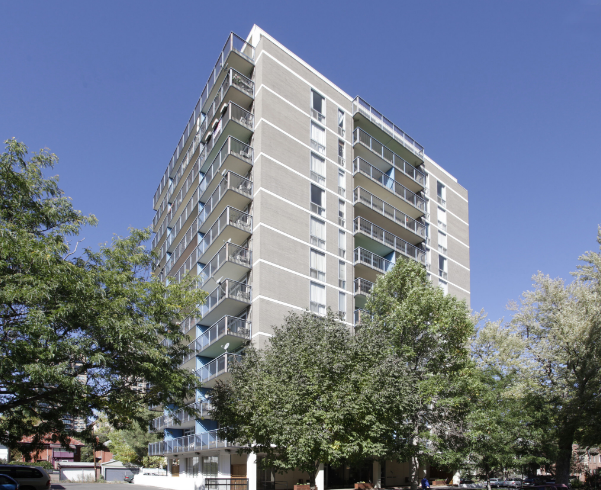 Over the next two decades, adults aged 65 and older will comprise of roughly a third of all households nationwide. For low-income seniors on fixed incomes, an affordable home that allows them to age in place can be hard to come by. Denver’s Montview Manor, a naturally affordable senior housing development, is located steps from City Park, one of the city’s largest parks, and is a short walk from a wide range of amenities, recreation, and services. The property was developed by Montview Building Corporation in 1962 with a federal loan program to provide below-market rate rents for senior residents and to operate the building. The Montview Building Corporation is an affiliate of the Montview Presbyterian Church.

Today, Montview Manor is an important source of affordable housing for older adults living in Denver. To continue Montview Manor’s affordability, address its capital needs and provide the required level of management and services to its existing residents, Montview Building Corporation decided to sell the property to another mission-aligned organization with the capacity and resources to own and operate Montview Manor.

Identifying a new owner with a strong commitment to resident stability. Through a request for proposals, Montview Manor Corporation selected Archway Communities (Archway) to acquire, preserve, and manage Montview Manor. For Montview Manor Corporation, it was important that Montview Manor’s new owner and operator could keep existing residents in place and reduce rent burdens of existing residents. Preserving the community, in this case, meant not using Low-Income Housing Tax Credits to rehabilitate the project because the tax credit restricted rent levels would require the new owner to displace several current residents whose income levels are above the required limits.Archway understood this from the beginning and was committed to doing whatever was needed to maintain the income mix of the existing Montview community.

Getting creative about financing. Due to the lower rent levels preserved at Montview Manor, the property did not have much capacity to take on debt – one third of Montview Manor residents paid rents well below HUD rent limits. Additionally, a high interest rate environment posed another challenge. Through strong relationships with local soft funders, Archway received their first mortgage from a Colorado CDFI, the Impact Development Fund (IDF) and their second mortgage through Colorado Housing and Finance Authority (CHFA) at fixed rates of 3 percent and 2%, respectively – half of what conventional lenders are offering. Archway was also able to keep their transaction costs low through very low legal costs and joint underwriting. Archway credited the support and creative underwriting from local funders, the City of Denver and State Division of Housing, as critical to this project and allowed for deep affordability without any tax credit equity to fill funding gaps.

Recalibrating rents to reduce housing cost burdens. Montview Manor resident incomes range from 20% to 120% of area median income (AMI). Since Montview Manor does not currently have a formal rent covenant directing how rents are set, it operated similarly to a market rate development: Rents were not tied to incomes. To reduce the rent burdens of existing senior residents and ensure that no resident would be displaced, Archway will reduce rents for housing cost burdened, low-income residents currently paying over the HUD rent limit and phase in rent increases for higher-income residents over time.Annual increases are limited to 5 percent. Additionally, a 60-year affordability covenant will be recorded on the property at closing so that 22 units will remain permanently affordable to residents at or below 30% AMI, 45 units will be affordable to residents at or below 60% AMI and 11 units will be restricted to tenants at or below 80% AMI.

Phasing in rehabilitation to minimize resident disruption. Keeping rents low and meeting capital needs can be a challenge for preservation projects, particularly for older buildings that may have deferred maintenance. Montview Manor Corporation identified approximately $7.7 million in capital needs over the next 20 years, half of which would require attention in the next ten years. Archway will make approximately $4 million in capital improvements within the first five years of acquisition, focusing on exterior façade upgrades, improvements to individual units, and accessibility upgrades. Archway also plans to include reserves to fund ongoing building maintenance and meet unplanned expenses. To avoid displacement of residents during renovation, Archway will prioritize in-unit rehab as turnover occurs and will utilize vacant units for any urgent in-unit needs.

Leveraging property management to build resident trust. Prior to Archway’s closing of Montview Manor, the organization served as an interim property manager to facilitate the transition of ownership and operations. This allowed Archway to get to know the residents, communicate their rent adjustment plans, and prepare for the rehabilitation process. Archway was fortunate to have the support of Montview Manor’s previous property manager, who stayed involved during the transition and ultimately helped Archway understand the building’s management and resident needs. While not all developers and organizations will have this ability, engaging residents as early as possible is critical to build trust and inform key aspects of the preservation process before it occurs – including a rehabilitation scope of work, required financing sources, and resident needs for day to day and long-term operations.

The impact. After the transfer of Montview Manor to Archway Communities, residents will be able to live in a well-resourced neighborhood without worrying about high housing costs and the risk of displacement, which likely would have occurred if the building had been sold to market. Additionally, residents will be able to retain their social ties and continue to age in place in a vibrant community.