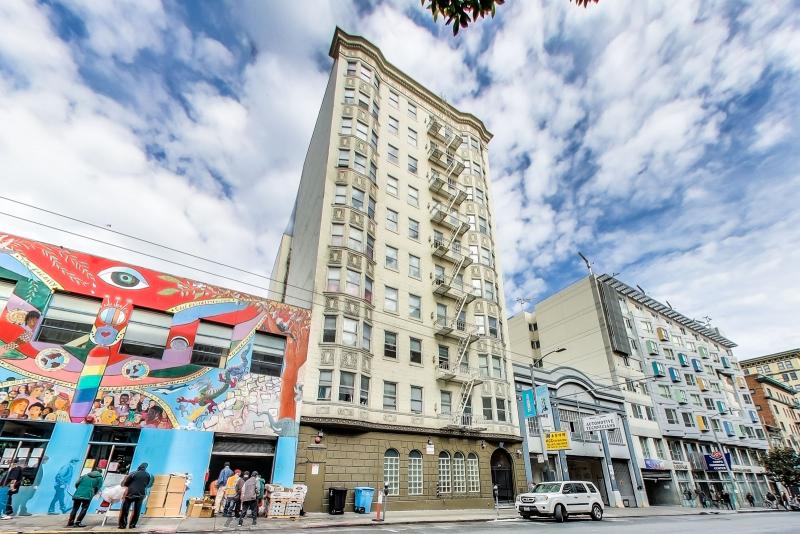 Prior to TNDC ownership, resident incomes at 270 Turk ranged from 20% to 170% of area median income (AMI). After TNDC’s acquisition, 24 units are permanent supportive housing for formerly houseless individuals, while existing homes serve an average household income of 60% AMI.

TNDC’s origins stem from renovating a Single Room Occupancy (SRO) residential hotel in the Tenderloin in 1981. While the organization has always been rooted in San Francisco’s Tenderloin, their presence has grown throughout the city, providing housing to over 6,100 people in San Francisco, a quarter of whom were formerly experiencing houselessness.

San Francisco’s Tenderloin neighborhood is located in the city’s downtown and is surrounded by some of the city’s most expensive neighborhoods, including Nob Hill, Union Square, and Hayes Valley. Since the 1950s, many residents found a home in the Tenderloin due the availability of affordable housing, including refugees and immigrants, LGBTQ residents, families, and seniors. Today, the neighborhood remains one of San Francisco’s most diverse communities.

A high share of the Tenderloin’s affordable housing stock is found in older buildings with one bedrooms, studios, and single-room occupancy units (SROs). As a result of zoning policies and SRO protections, rent stabilization, a strong activist community, and a significant presence of affordable housing organizations, homes in these buildings have remained relatively affordable, despite being surrounded by some of San Francisco’s most expensive housing. Approximately 40 to 50 percent of the Tenderloin’s housing stock is rent stabilized, and roughly 25 percent of homes in the Tenderloin are owned by nonprofits or are publicly subsidized.

However, the neighborhood is not immune to gentrification pressures and many of Tenderloin’s low-income residents lack safe, stable, and permanent housing. Some are on the brink of eviction, living in unhealthy housing conditions, or currently experiencing houselessness.

When the Barcelona Apartments at 270 Turk went up for sale in 2018, low-income residents living in the building faced a precarious situation: If the building was sold to a profit-driven purchaser, rents would likely be repositioned to market rates over time. The Tenderloin Neighborhood Development Corporation, a nonprofit community development corporation, saw an opportunity to acquire 270 Turk and keep the homes as permanently affordable.

Start building relationships with residents early. Resident engagement may bring acquisition opportunities to the forefront that an organization may overlook. Through TNDC’s Community Organizing division, the organization had previously engaged with 270 Turk’s residents and learned that residents were worried about the fate of the building and expressed their fears of displacement. Additionally, TNDC learned that some residents were living in unsafe and unhealthy housing conditions. While organizations can look at rent rolls and connect the dots, talking directly to residents and receiving on the ground intel was crucial for TNDC to understand the need for preservation at 270 Turk.

When TNDC acquired 270 Turk, one of their key priorities was earning the trust of existing residents. Even when properties transfer ownership to mission-oriented, affordable nonprofit organizations, it can cause mistrust among existing residents. TNDC coordinated resident meetings and continued to conduct direct resident outreach to assuage fears of rent increases, including plans that TNDC did not intend to flip the building and that they had a comprehensive rehabilitation plan to improve health and well-being of the residents without passing through capital improvement costs to residents – an exception in San Francisco’s rent stabilization policy that allows property owners to amortize rehabilitation costs through rents.

Quick, flexible, and low-cost financing is crucial for mission aligned organizers to put together a competitive bid. TNDC’s strong relationships and partnerships with public agencies and financing partners made it possible for the organization to quickly put together a competitive bid to acquire 270 Turk. Before the COVID-19 pandemic, rental demand was strong in San Francisco and when properties went up for sale, nonprofit affordable housing organizations were often outbid by well capitalized purchasers. Since 270 Turk property was listed on the open market, TNDC needed to put together a strong market rate bid to acquire the building, which was no small feat.

TNDC worked with a broker to negotiate with 270 Turk’s previous owner – a market rate owner selling three other properties in the Tenderloin. The organization needed $18 million to purchase the building and approximately $6 million to make initial health, safety, and resident quality of life renovations. Through a $24 million bridge loan from a local CDFI, San Francisco Housing Accelerator Fund (SFHAF), TNDC was able to acquire the building and cover health and safety rehabilitation costs. SFHAF was the perfect partner to provide bridge financing due to their ability to quickly generate financing, their low cost of capital, flexible underwriting, strategic thought partnership, and commitment to affordable housing preservation.

Through a partnership with the City’s Department of Homelessness and Supportive Housing (HSH), TNDC was able to provide deeper affordability and provide 25 percent of 270 Turk’s homes as step-up housing for San Franciscans that formerly experienced houselessness and were living in shelters or temporary housing. DHSS provides rental assistance and an annual operating subsidy for households below 30% AMI and provides household referrals.

Strategically prioritize essential versus desirable items in your rehabilitation scope of work. With some of the highest construction costs in the country, TNDC was strategic and judicious about rehabilitation. When TNDC was creating their rehabilitation plan, they convened their resident services and property management staff to establish what was essential and what would be “wish list” renovations.

A large share of the rehabilitation budget was used to address factors that posed health and safety risks to current residents. TNDC added fire sprinklers and a mechanical ventilation system to cycle fresh air through all the apartments – a feature that is often missing in older buildings. While these renovations were not highly visible, they were critical to improve existing housing conditions and remediate an existing mold issue.

TNDC’s model as an affordable housing organization includes owning and operating their own properties, and it was important to have on-site services. At 270 Turk, the organization took one unit offline to ensure they could build an on-site social services suite where residents can schedule one-on-one meetings with on-site social workers. TNDC also ensured that the first floor could house an on-site property management team. While TNDC hoped to develop a community room for residents, they decided to put more of the rehabilitation budget into upgrades in residents’ homes while opting to use the building’s lobby as a gathering space, which successfully serves as a flexible space used for community programming and meetings.

As a building with rent stabilized units affordable to low-income households and units that reset at market rate as residents vacated, 270 Turk housed a wide range of resident incomes. With natural turnover as higher-income residents vacated, TNDC relocated residents on-site.

The impact. Preserving existing affordable housing in a high-cost city such as San Francisco is crucial: properties that are sold are likely permanently lost to the market and very expensive to re-introduce through new construction. For neighborhoods like the Tenderloin that are experiencing market pressures yet are home to many longtime community members, preservation can achieve multiple goals exemplified by 270 Turk: It can provide increased investment to make quality of life improvements, provide housing stability for legacy residents by securing permanent affordability, and even expand affordable housing options by providing deeper levels of affordability where units were formerly market rate.