Between 2012 and 2015, community organizers, legal aid attorneys and local nonprofit developers in San Francisco noticed a pattern: Many of the tenants with whom they were working shared the same landlords. Each of the tenants faced the prospect of displacement from their home due to a large rent increase or an eviction notice. In an early success for the Small Sites Program (SSP), Mission Economic Development Agency (MEDA) and the San Francisco Community Land Trust (SFCLT) came together to purchase a portfolio of five properties where tenants were at risk of losing their homes – all owned by the same local real estate investor. 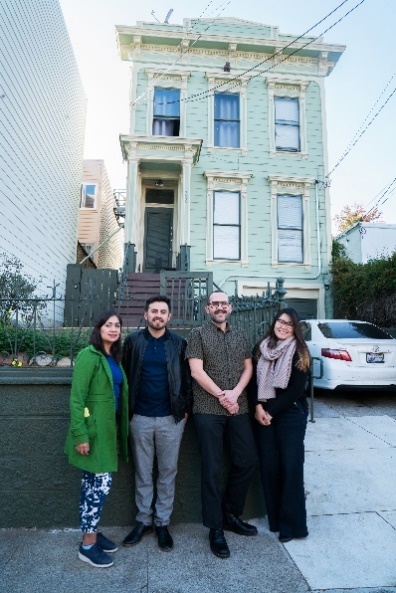 For MEDA, acquisition-rehab has become a central strategy in their ongoing efforts to preserve the cultural diversity and vibrancy of the historically Latinx Mission District. Their housing work complements other programs and services aimed at advancing economic opportunity. SFCLT focuses squarely on preventing displacement through the acquisition and stewardship of properties occupied by low- and moderate-income residents throughout the city. With a model that centers broad resident participation, their portfolio includes a resident-owned limited-equity cooperative, group housing co-ops and traditional rentals.

Located in the heart of the Mission, the four-unit building at 380 San Jose Avenue has been home to several significant cultural figures in the Latinx community, including current resident and celebrated artist Yolanda. San Francisco’s rent regulations kept the apartments relatively affordable over the years. However, under the ownership of an absentee investor, long-term residents like Yolanda had little interaction with their landlord and learned to cope with the aging building’s quirks and hazards. “We found it was easier for us to take care of things ourselves,” said Yolanda. The situation took a toll on residents, who lived in a constant fear of fire and other safety issues.

The first eviction notice arrived just before Christmas. In her 70s and struggling with health issues, Yolanda couldn’t imagine an alternative to her current home. She was devasted. “My first thought was ‘Where am I going to live? Should I start packing up right now?’” The eviction notice set off a period of anxiety, legal disputes, community activism, and hypervigilance as Yolanda, her son and three other seniors in the building did all they could to delay the inevitable.

Neighbors and activists were galvanized by the eviction attempt, launching a series of public demonstrations that brought increased attention to the issue and public scrutiny over the landlord’s actions. Working alongside the timeline of the eviction proceeding, MEDA eventually acquired 380 San Jose Avenue as part of the portfolio, putting their mission of place-based cultural preservation and community development into action. Tragically, this inspiring win was marred by the passing of one of the residents, who was battling cancer in her last days in the building.

I realized looking back on it how stressful it really was. Especially the Ellis Act. It just felt like, if I can’t live in San Francisco, where am I going to go?
Mark, resident of 72 Belcher Street

Less than two miles away in the Castro District, residents of 70-72 Belcher Street had a parallel experience. In the 1970s, Mark, then a 22-year-old from Idaho, moved to his current home on Belcher Street. His early roommates and neighbors included a rotation of artists, musicians and eccentrics that together made up the unique social and cultural fabric San Francisco was known for. When an investor bought the building in the late 2000s, maintenance and upgrades became less frequent and dependable. When improvements were made, they were mostly cosmetic and done with little tenant input. Residents felt these changes were intended to help market the building to new, higher-income households.

Eventually the landlord began to offer Mark and his neighbors lump sums of money to move out, but they all agreed to refuse cash payments in exchange for their homes. Soon after, the residents received Ellis Act eviction notices. Three eviction attempts were made in a short amount of time, but Mark and his neighbors were able to fight them with legal representation from the Tenderloin Housing Clinic. In the meantime, Mark was in a constant state of uncertainty and anxiety. When faced with the prospect of moving, he too couldn’t imagine an alternative. “I felt like if I have to move, there’s nowhere in San Francisco that I can afford.”

When SFCLT got involved, things took a more hopeful turn. While coordinating with legal advocates to delay the eviction proceedings as well as the Mayor’s Office of Housing and Community Development to secure funding, SFCLT staff began meeting with the residents of 70-72 Belcher Street to understand their needs, collect information on the building, and share information about the development process.

Turning a House into a Home: Lessons Learned

The purchase of the five buildings in early 2016 was a major victory for SSP, the organizations involved and ongoing anti-displacement efforts across the city. But the process of preserving these buildings was not without complications. Old buildings like these often have limited space for the relocation of residents and personal items during the construction process, which can be especially disruptive and unsettling for older residents and people with disabilities. Even with thoughtful planning on the part of the steward, these disruptions can compound the trauma of the prior eviction process and other life challenges.

I really felt like this apartment changed into my home when the land trust bought it.
Mark, resident of 72 Belcher Street

Transitioning to nonprofit stewardship also means transitioning to a new management structure with new rules. Previously, tenants had years, if not decades, of experience with a conventional landlord relationship and local rent control. Nonprofit acquisition meant exiting that system and entering into an arrangement with the nonprofit, introducing programmatic rules enforced by the city, lengthy and complex lease agreements, and annual income certifications.

But with these tradeoffs come a variety of benefits. Despite the challenges brought on by the transition, Yolanda appreciates not only her building’s newfound stability, but also the ability to access MEDA’s financial empowerment services, including tax preparation and computer literacy classes. Mark has found himself more capable of dealing with daily stressors and imagining his future, including the possibility of retirement.